Every Dog Trainer needs a Pablo 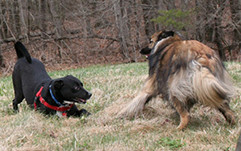 I will define another category of Reactive Dogs. In the past, I have written about dogs who are very social and react because they are “Persistent Players” and love to play with dogs.  Our canine friends have different reasons for reacting at the sight of another dog. Once you are able to identify “why” your dog is acting this way, then we can put a training plan in place.

For this Blog, I am defining “Persistent Sniffers”  These dogs  primarily investigate their environments using their nose, as seen by their heads to the ground often. They are slow to come when called because what they are sniffing is very important to them.   They become activated at the sight of a dog seen by their chaotic foot movements and exaggerated joint flexion.  They are environmentally confident and have no hesitation navigating new places. They may be vocal when they are unable get to what they want. They are persistent in nature, seen by their continued attempts to get to what interests them. When off leash, these dogs may have a history of greeting unfamiliar dogs with a thorough head to tail scent intake, yet are quick to disconnect and move along.  Some will initiate play, but only after they have fulfilled their olfactory needs.

If I just described your dogs preferences, then it is likely your dog has already been labeled reactive.  Now you can see that he is indeed frustrated, and better understand that his temperament is partly responsible for driving his behavior. For dogs who are food or toy motivated you can often reward an alternative behavior. For dogs who are less food motivated management is often recommended as some dogs are so persistent nothing will override their preference.

This was the case recently with a handsome Golden Retriever mix who was lunging on the leash at the sight of any dog. As he entered 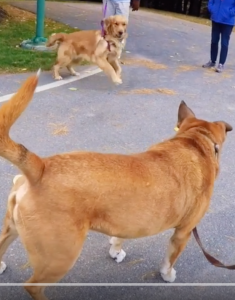 my office, I noticed he immediately put his nose to the ground and sniffed the rug, toy box, dog bed, shelf and furniture. At one point, he briefly made eye contact with me as he entered my space, I reached out to him but his awareness went to sniffing my pants and shoes.  He was unable to be off leash as he would not come when called, he always had his own agenda when outside.  While he ate the treat I offered, he was more interested in using his nose once again along the dog bed.

When outside, he did as his owners predicted.  He began to jump around with chaotic foot patterns, barking rapidly, and pulling on his leash to get to my dog, Pablo who was sitting calmly ignoring the bouncing Golden.  I let the Golden walk past Pablo a few times so the Golden would clearly see that Pablo was not engaging him in any way. Pablo went so far as to give a few low growls, but there was no change in the Goldens behavior. I then let them take their boy far away for several minutes so he could recover from his highly aroused state. At this distance, he was rewarded for reorienting to his handler. We repeated this approach and retreat many times as described in Behavior Adjustment Technique (BAT). Each time we were about 30 feet apart, the Golden repeated his request to engage Pablo’s.  Pablo’s preference is food, so he completely ignored and even sat with his back to the Golden for 15 minutes or more.

Eventually, Pablo turned towards the Golden and gave a hard eye stare accompanied with a stiff body and low growl. The persistent Golden paused briefly, but was unable to change his behavior.  We took a break and walked far apart to aid in the golden’s recovery. It is rare for a dog to not read Pablo’s cues, he is known for being very clear.

Every dog trainer needs a Pablo!

Many dogs are labeled “reactive”, however this is a big bucket term. If you observe your dogs preferences, how he engages with his environment and how he responds to both familiar and unfamiliar dogs, you may be able to identify why your dog is acting this way. If he is simply frustrated, determine his preference and find a way to allow him what he so desires.

If you have tried “reactive” dog classes with no luck, consider your dogs persistent nature and how it effects his every day behavior. It may be that your dog is unable to change because his preference is so extreme,  you may not be able to offer him anything more valuable. You may just need to meet a few Pablo’s to help your dog with his impulse control.